How did I get into this?

About three months ago M says he is going to run the town of Celebration Florida marathon at the end of January.  I like to run marathons, and I like going to Florida in January as well. Figuring I would be shot down, I mentioned the idea at home, and it was surprisingly well received as we could also visit with family. Southwest tickets were pretty cheap for a quick round trip to Orlando. A plan was hatched.

Upon turning 50, my qualifying time for NYC marathon became 3:14 or better. That became part of the plan. In addition, I wanted a better starting time for Boston this Spring. I qualified at the very hot Boston last Spring with a 3:26.  Not a great seed time, but enough to get an old guy to the starting line. The last day to change your Boston qualifying time happened to be 1/29/2017, so that became another plan. The final plan would be qualifying for Boston in 2018.

I dusted off my Advanced Marathoning book, and started in with a 12 week program based on the 70 mile a week plan, although I modified it to be a 60ish mile a week plan. T and J were always up for a long or hard run, making the training fun.Global warming also helped with not so much snow and mild temperatures for upstate NY weather. For most of the Winter I was actually to run on the Zim Smith treadmill.

This is pretty flat run/bike path that goes for about 17 miles without having to worry about cars or traffic most of the way. It is the closest to a treadmill that I run. Normally in the winter this is a snowmobile/ski trail, but for most of this year it has looked a lot like the picture above just without the green.

I had some great long runs with J, T, and even A.

Getting there is half the “fun”

Race weekend arrived in what seemed to be no time at all. As my wise brother told me time appears to go by faster the older you get because each day is a smaller percentage of your whole life. This seems to hold for running as well, the longer I have been running the quicker a 12 week training plans goes.

What state is Orlando in?

The flight to Fla. was uneventful and even early. We quickly moved through the airport to the rental car desk. To my chagrin, we quickly discovered that I had booked the rental car in NC instead of Orlando. Obviously, that was less that useful to us. Unfortunately, there was some sort of sports event going on in Orlando and all they could rent us was a compact car. We walked over to the car and it was tiny, think clown car tiny. We managed to squeeze in our 3 roll-ons and 3 backpacks. Before we pulled out, the family gave me the look that the vehicle was less than adequate. I returned to the desk and pleaded for another option, although sti

ll smallish the next choice had a trunk that held all of our stuff.

Made it to the Expo on time

The rental car incident ate up all the extra time we gained with the early flight. The plan included picking up the race bib before the Expo closed at 8:00 pm. Like a well-oiled machine, we arrived at the Expo 4 minutes before 8. Bib pick up went smoothly and I even won a drawing granting me an extra shirt from the previous year. The only hiccup being the sandal un-friendly timing chip. It attaches to your shoelaces… At least I would have a day to figure that one out. We obtained a reservation at Columbia a very nice Cuban restaurant at 9, giving us just enough time to check into the hotel before dinner. After staying up way too late watching Shannara Chronicles on Netflix, it was time to sleep.

The next morning, I ran the traditional 4 easy miles before a marathon.(https://www.strava.com/activities/846991184). It gave me a good opportunity to check out the start line for the next day. When I returned we made a quick trip to the local Publilx grocery store for some breakfast shopping. The kids were still sleeping. After shopping and eating, we departed for Dayton Beach where I spent my teenage years. The trip went well with a visit to the Kale Cafe, a fantastic vegan food and smoothie restaurant. We even made it for a short visit to the beach which even on a cold day always manages to inspire. 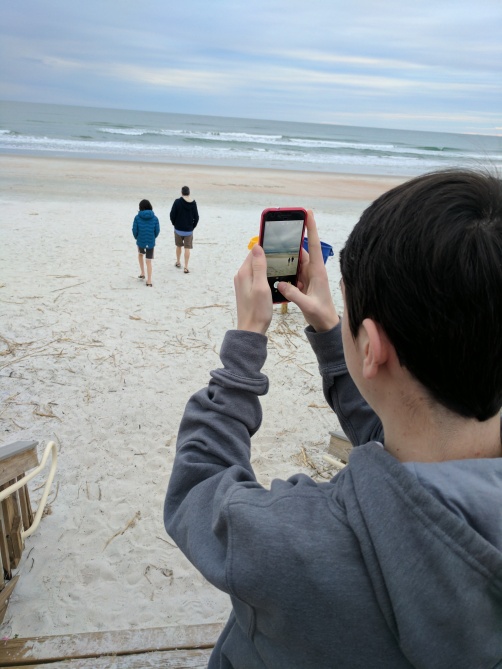 The race started at 7:00 am, which is pretty early for a marathon, and kind of nice because it meant I would be done at a reasonable time. However, it did mean I had to get up early. I like to stop eating and drinking an hour before a marathon, so I set the alarm for 5:30. I ate a few sprouted grain almond butter and honey sandwiches chased down with chia and tart cherry juice then climbed back in bed for a little while. We left for the start at about 6:30 taking the same route I had run the previous morning. The weather was cold for Florida (48 F) and raining. I decided to wear my llama hat and some gloves. I debated barefoot or Luna sandals and decided on the sandals because of the rain and lack of barefoot training during the past 12 weeks.

I made it to the start line with about 5 minutes to spare, which makes for a perfect start to the race. Since it was overcast and still a bit dark, I found it hard to read the pace on my Fenix 3 GPS watch for the first few miles and went a little fast. The marathon had 400+ runners, and the half marathon had about 1700 runners. Since the half and the full shared the course for the first 12.5 miles, it meant for a big crowd. However, I started near the front and never felt crowded.

At mile 4, I ran past the hotel where Naomi was cheering me on, and I was able to ditch the hat and gloves. For some reason 48 and rain is warmer in Florida than in NY.

The course is mostly roads, except for the 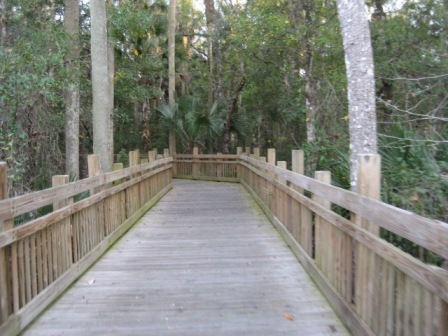 boardwalks starting around mile 7. These are wood planked walk ways elevated over Florida swamp land. They seem to be expressly designed to keep people from running on them. They have lots of twists and turns and are of course slippery when wet. Fortunately, the planks only cover about a mile of the course.

As I approached the 12.5 mile point in the race, lots of happy halfers were glad to be done with the race as they picked up the pace and headed for the barn door. For me and the other marathoners it was back out for another lap. I held on to my target pace until around mile 18.  The second round of boardwalks gave me even more of an excuse to slow down (it is all such a mental thing).

In the last mile, I am pretty sure I was passed by number 1 and 2 in the 50-54 age group, I was just out of steam running in the 8’s.  Can’t say I was hurting bad, just not going terribly fast. I crossed the finish line at 3:19:31 my second fastest marathon ever. Not the 3:14 NYC qualifier I was shooting for, but not a bad marathon for the first one of my 50s. Here is the strava data.

I put in my time on the Boston page as it was 7 minutes faster than my BQ time and should push me up in the starting line in April. As another bonus I am now qualified for Boston 2018 by more than 10 minutes. That should allow for an early stress free registration. Next race will be Boston this April, and since I am qualified already if the weather cooperates, I plan on going for a barefoot run from Hopkinton to downtown Boston.

Here I am with my award for 3rd in the 50-54 age group. You can see the timing chip that I had to attach to one of my wife’s hair bands wrapped around my ankle.

We spent the rest of the day at the hotel with my sister in law and nephew.  As we watched the news unfold my youngest created a sign on a pizza box to bring to the airport to join in the protest of the travel ban. However, by the time we reached MCO he was the only one protesting.

The trip home thankfully was uneventful and we arrived home a little early.

My calves were about as tight as they have ever been. I guess that is the result of 26.2 very flat miles. From an 11 minute per mile 3 mile run on Tuesday to an 8:52 paced 13 miles on Sunday the recovery went well, and I would say eight days out and I am close to 100% back in business, can’t wait for Boston!

Oh yeah, looks like Winter is back as well: 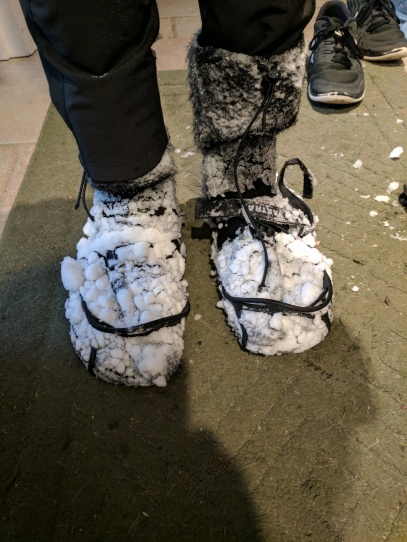